'Technology not taxes; what about spending?'—We know this year’s Budget is going to be in the red. But what if it was also green?

If the Government is committed to meeting its emissions reductions targets via ‘technology not taxes’, the Federal Budget is the litmus test of its resolve.

For Australia to achieve emissions reductions without demand-side measures such as carbon caps and pricing, we will need to rely on huge amounts of government spending. This isn’t terminal to Australia’s climate policy. But are we spending enough?

Despite committing more funds to bolster the economy than most other countries, Australia currently ranks as one of the lowest in terms of the proportion of our recovery spending that has gone towards ‘green’ initiatives (see Figure 1). This is despite recent investments in clean R&D, storage, transmission, and hydrogen projects. 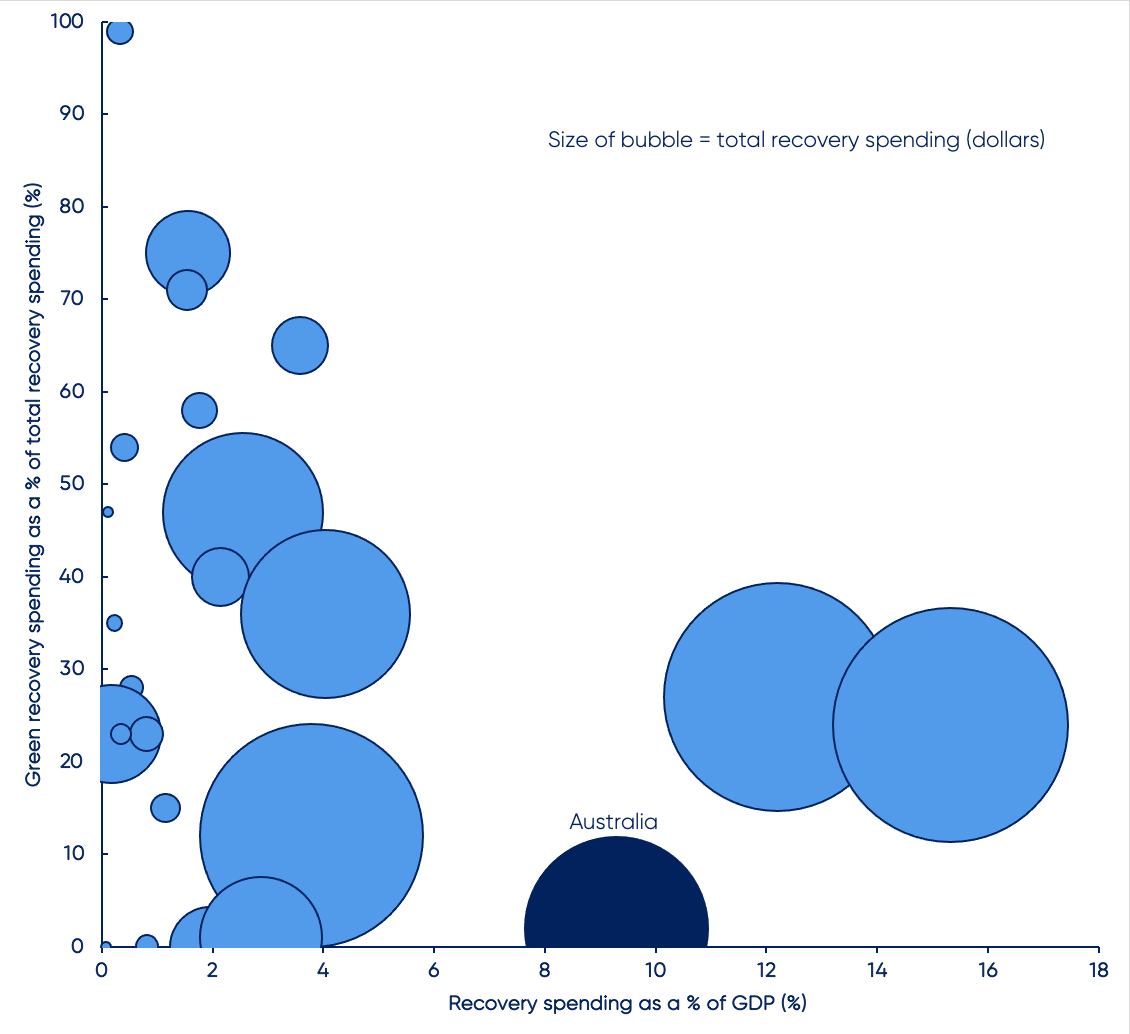 The Treasurer has identified that growth, rather than austerity, is his preferred strategy to manage the Budget. So we should be looking to invest in productivity-enhancing projects.

Green energy investments tend to generate higher economic multipliers than more traditional expansionary fiscal policies. They are great for job creation in both the short and longer term. The impact of every public dollar spent on green initiatives is also amplified by the ‘crowding in’ of additional capital—the private sector often wants a piece of the cake too.

Green spending can accelerate our progress towards achieving our Paris targets. Through substantial and meaningful green spending commitments, the Government has a real chance to recast the world’s vision of Australia’s currently weak climate stance.

So what level of expenditure could we reasonably expect?

If Australia were to match the green stimulus of other major economies, our green spending would need to rise from the estimated 2% of COVID recovery spending in last year’s Budget to around 20% this year. Other nations clearly get the stimulatory impacts green initiatives can have.

But we must also consider the quality of this spend.

Here are five areas that Australia’s green stimulus should be focused:

Without an economy-wide price, the ERF is the most economically efficient abatement mechanism that we currently have at our disposal. But its effectiveness has stagnated in recent times. In the first three auctions, 48 million tonnes of emissions reductions were, on average, purchased by the Fund. In the last three rounds, this figure has fallen to 5 million.

The cause of this volumetric decline is a lack of sufficient funding. As emissions reductions continue and the cheapest methods of abatement are fully implemented, further cuts to emissions levels have become more expensive. In recognition of this, the Federal Government introduced the $2 billion Climate Solutions Fund in 2019 to continue purchasing abatement through the ERF.

But this week’s Budget should aim to increase this amount fivefold. $10 billion of funding for emissions abatement, on top of the original ERF amount, would be more to the tune of what we need to reach our Paris goals. And the green abatement projects this funding would underpin could help us achieve a low-emissions economic recovery.

Australia lags behind other countries in terms of green R&D spending (see Figure 2). Our public research expenditure on energy technology is in dangerous decline—it’s share of GDP has fallen by 80% between 2013 and 2018 (see Figure 3). 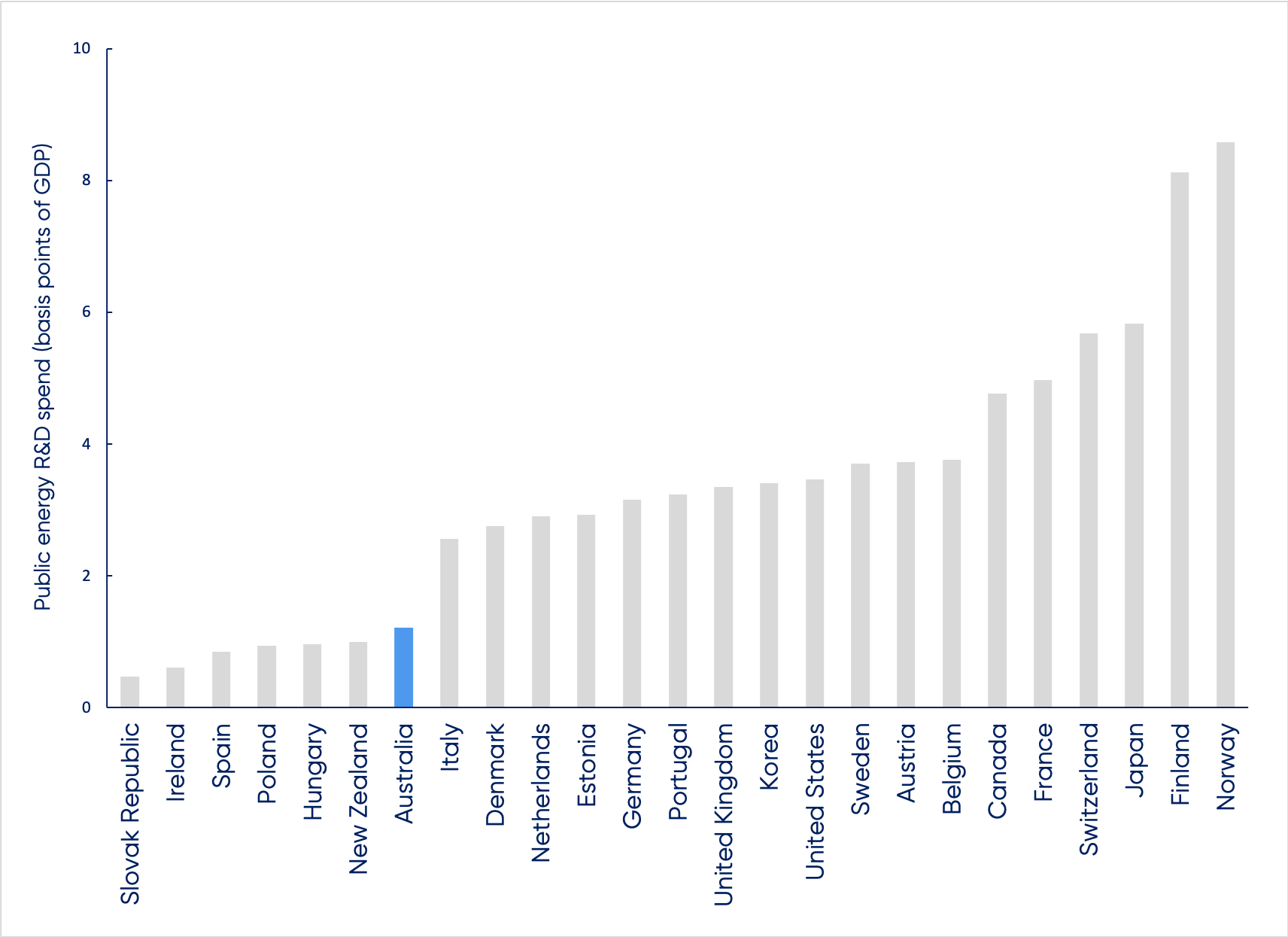 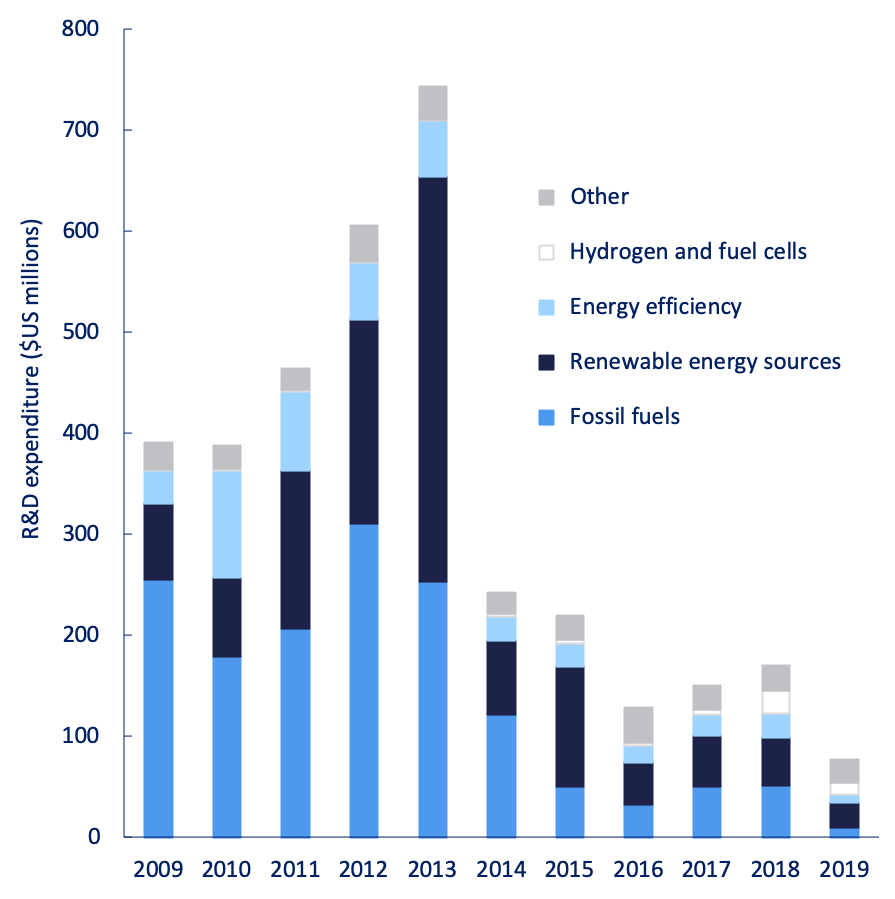 The Government’s pledge to support hydrogen projects and new long-term funding for ARENA are all steps in the right direction. But even with these, our green R&D spend does not compare to our peers in relative GDP terms. Australia should triple its green energy R&D expenditure in this week’s budget. This would bring us in line with the IEA average spend and improve our climate credibility.

With the transport sector the third-largest source of emissions in the country, the electrification of our private vehicles should be a decarbonisation priority. Yet, in 2019, just 0.6% of new cars sold in Australia were electric. This is, in part, due to our failure to price carbon into the operation of fossil-fuel-powered cars. And also because EVs are still shifting down the technological cost curve. But electric vehicles’ price tag is not the only factor that is inhibiting high volumes of purchases.

Scale will matter a lot for EV uptake across Australia. Charging infrastructure is a major impediment of their widespread adoption, especially when our population is so geographically dispersed. Coordinating efficient investment in infrastructure development between car manufacturers will be difficult to achieve, so the Government should take a lead in establishing an EV charging infrastructure investment fund. This would see them co-invest in the infrastructure needed to support the electrification of our country’s transportation fleet. The Budget represents an opportunity for the Federal Government to make this kind of funding commitment.

Coal-fired generators are currently the single largest source of emissions within Australia. This makes managing their orderly phasedown the low-hanging fruit of our decarbonisation challenge and critical to providing certainty to the communities which rely on them for employment. But reducing their capacity within our national energy mix is not just a matter for the environment—an economic case exists for their closure too. The growing penetration of near-zero marginal cost renewables, such as wind and solar, have made the operation of coal-fired generators increasingly unviable.

Whilst the future of coal-fired power plants in Australia is clear, the question remains as to how and when these generators will go. This uncertainty impedes investment in replacement capacity, inhibits transmission network planning, and risks energy price spikes in the case where a generator suddenly and unexpectedly exits the market.

In light of this, the Government should coordinate the orderly closure of coal-fired generators in Australia by implementing a Coal-Generation Phasedown Mechanism (CPM). The CPM would establish emissions targets for 2026, 2028, and beyond 2030 for the coal-fired generation sector, which would be achieved through the allocation of emissions contracts to power plants via auction. Whilst the funding of this mechanism could be paid for by the taxpayer, the generators, or a combination of both, the 2021-22 Budget represents an opportunity for the Federal Government to financially back some version of the CPM to ensure the security, affordability, and reliability of our national energy grid for the low-emissions future that is to come.

5. Forge an adaptation and diversification plan for fossil fuel regions

Coal mining and coal-fired electricity generation are critical parts of regional economies. Coal mining plays an important part in putting food on the table for many regional Australians. The sector accounts for around 10% of Australia’s GDP and returned $6 billion in royalties to the Australian people in 2019. As of December, 39,000 people were directly employed by the coal mining industry, with at least a further 6,400 employed by coal-fired electricity generators. Though timelines may vary by sector, and depend on dynamic global policy settings, jobs in these industries will not survive as the world shifts to a net-zero future.

We know that decarbonisation will be costly. And it’s in no one’s interest to prop up industries that will inevitably fail. But the costs of structural decarbonisation should not be borne solely by the communities that rely on emissions-intensive industries.

The Government should dedicate significant resources to supporting regional Australians. The first step is to be honest with coal communities about their future. But we owe people more than honesty—we owe them an effective policy response. Effective adaptation will require a suite of complementary policies that unleashes the productive potential of our regions and provides support to workers. Developing these policies should be a top priority for the Government.

A low-emissions recovery today will multiply our economic growth tomorrow, and can save us costly abatement later on. We know this year’s Budget is going to be in the red. But what if it was also green?

Emma Beal is a Researcher and Harry Guinness is the Founding CEO at Blueprint Institute. These recommendations were first listed in the Institute’s report Budget Blueprint 2021: The roaring twenties.

Amid the inflation hysteria, here's some perspective on Australia's real problematic index

Reclaim Liberalism: The fight against the CPAC populists must be won