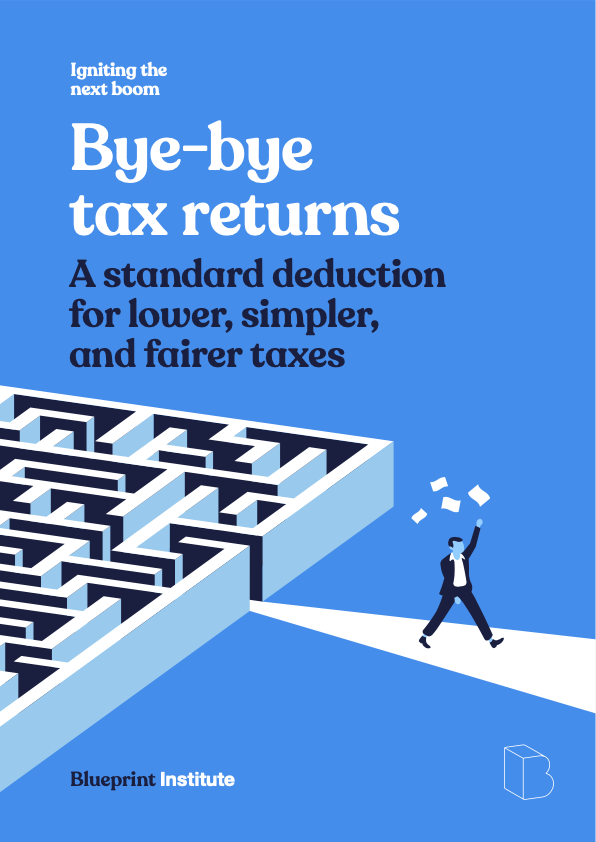 Australians spend $2.3 billion a year managing their tax affairs—about what we spend on Coca-Cola products. And, because it’s tax deductible, a big chunk is picked up by the taxpayer. 70% of people pay an accountant to prepare their tax return—an unusually high proportion compared to other countries. The ATO costs us $3.8 billion a year to administer and enforce the tax law, employing nearly 20,000 people. That means 1 in every 300 dollars in our economy goes to the ATO or a personal tax accountant or lawyer—two sides of the same coin.

When you get your phone bill, the phone company doesn’t ask you to itemise all the calls you made, on what dates, for how long, and to whom. They send you a bill. And that’s exactly how our tax return process should work. We’ve made big leaps with pre-filling and the online myTax system, but they’ve hardly moved the needle in peeling people away from their tax accountants.

The single biggest impediment is our complex and open-ended system of tax deductions. In the war on tax returns, tax deductions must be the opening salvo. Three quarters of people claim tax deductions, totalling $37 billion a year. Because they aren’t pre-filled, people have to keep a box of receipts to take to their accountant at tax time. We estimate this complex system costs Australians $6 billion a year in compliance costs alone.

The system is also unfair. Those who know how (and are willing) to game the system do so—and pay less tax than everyone else as a result. That means that, in order to raise a given amount of revenue, taxes must be higher on everyone else. Four in five discrepancies in tax returns are for deductions, half for work-related expenses. The Government is not a charity; taxes, by definition, are not optional. But our vague system of deductions, which affords considerable discretion to the taxpayer, makes them so.

But, of course, we already know the answer. Review after review has told us. And every day we dither, the bill racks up. No longer. Australia should introduce a $3,000 standard deduction covering work-related expenses and a range of other personal deductions. Charitable giving, super contributions, and investment expenses, like the interest on negatively geared property, would be excluded. Taxpayers could continue to itemise their deductions if they wished, so nobody would be worse off. And 11 million taxpayers would be better off.

A standard deduction would:

Our failure to introduce a standard deduction, despite a series of reviews recommending it, is a microcosm of our failure to enact serious tax reform in the last two decades. A new tax reform process must focus on tangibly improving people’s lives. On simplifying our tax system, cutting away the red tape that makes our lives more difficult. And on stamping out gaming, which undermines people’s faith in the system. All other things equal, simpler is better.