Amid the inflation hysteria, here's some perspective on Australia's real problematic index

For anyone interested in looking past short-term volatility to glean insight into long-term economic trends, the last few years have been challenging to say the least. In this rollercoaster economic environment, it can be hard to see the forest for the trees.

But there is one indicator that has remained remarkably consistent over the past decade—nominal wage growth. Last month’s quarterly wage data—which showed a tepid 3.1% increase over the past year—is a sombre reminder that, despite periods of low and high inflation, unemployment, and GDP growth, annual nominal wage growth in Australia has barely budged from a narrow band of 1.4%–2.6% since 2014. Before 2014, three percent was about the floor for annual wage gains.

It might be hard to remember, but in the long-ago days of 2021 it was dismal wage growth that motivated the RBA to make its now infamous commitment to keep interest rates low. Governor Phillip Lowe made his motivations explicit: maintain ‘loose’ monetary policy until wage growth exceeds three percent. Then, and only then, would price inflation rise to the desired two to three percent range.

Soaring inflation around the globe due to pandemic- and war-driven supply shocks have diverted attention from the fact that, even with the tightest labour market in half a century, we still have only just barely exceeded that three percent nominal wage growth target.

Can unexpectedly low wage growth be another calamity pinned on the COVID-era economy? No. Even before the pandemic, the RBA had spent years consistently underestimating how far unemployment would have to fall to finally spur decent wage gains. In fact, the RBA was forced to cut interest rates to a historic low of 0.5% before the pandemic in an attempt to create conditions that would drive unemployment lower, and raise wages and inflation. 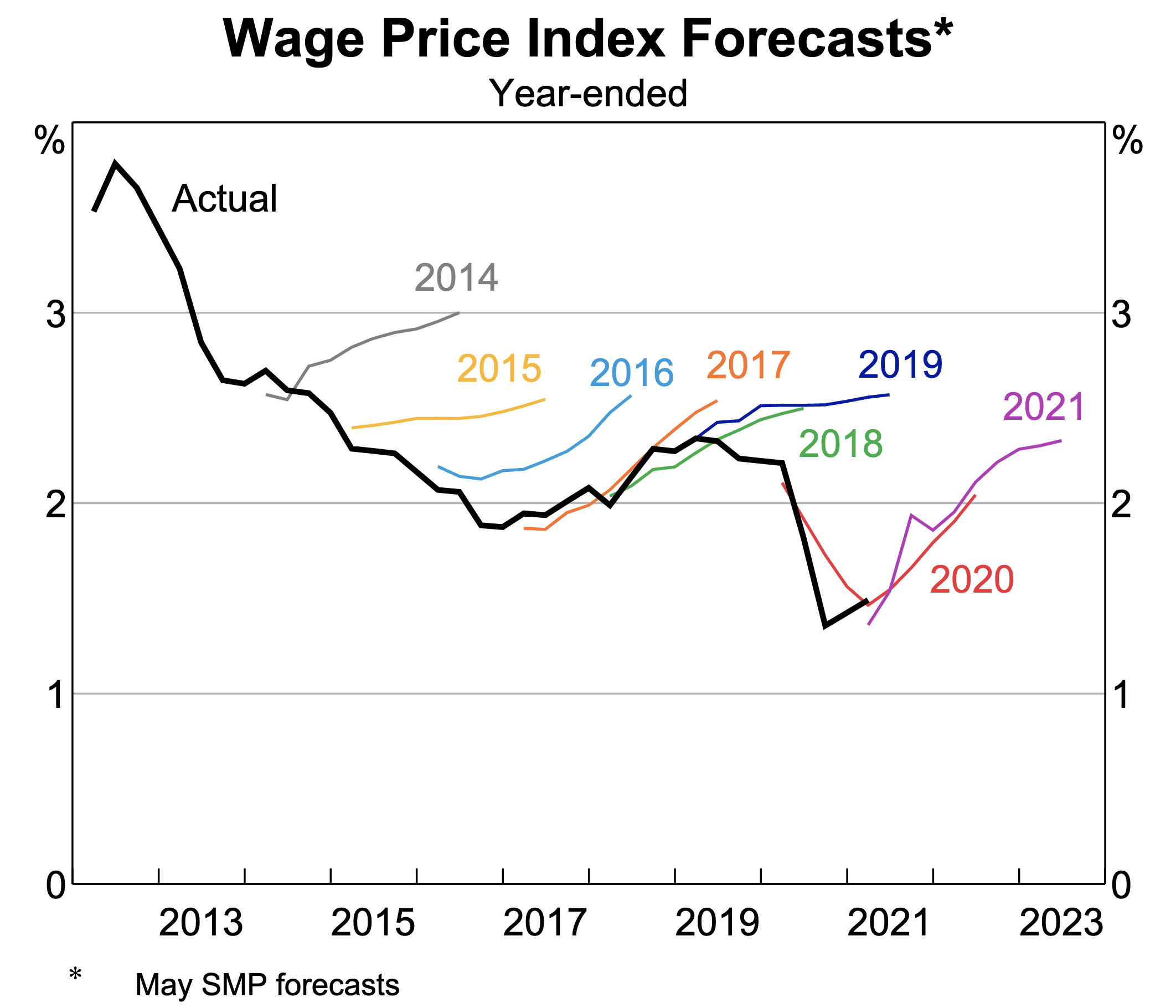 In the short run, subdued wage pressures are extremely convenient for policymakers—it means interest rates will not have to rise as high to tame inflation. But, in the longer term, it is worth questioning whether the economic regime of low nominal wage growth and low interest rates serves the average Australian well.

The benefits of low interest rates have overwhelmingly flowed to asset owners. Cheap money has fuelled a boom in stocks and property prices over the last decade. The majority of Australians who rely on wages for the bulk of their income have instead struggled with an increasingly unaffordable housing market. Even the most pessimistic predictions of a 20% decline in house prices during this interest rate tightening cycle still leaves valuations roughly at a pre-pandemic level. Meanwhile, real wages have declined to levels last seen in 2012 and are projected to continue falling for several years yet.

Australians are increasingly divided into two groups—those who had the good fortune to buy housing when it was still affordable and made a killing due to the massive rise in asset prices, and those who did not.

Neither side of the political aisle benefits from the current state of affairs. The right is confronted with the long-term decline of its base as younger voters are unable to break into the ownership society, while the left faces immediate pressures as their constituents in the labour movement suffer from declining real wages. In the absence of higher wage growth to enable a larger share of Australians to benefit from the fruits of economic growth, we are creating fertile ground for intergenerational conflict, and economic and political instability.

So what is the solution? Yes, reforms to enhance labour productivity are critical to increasing the size of the economic pie. But embedded in the calls to raise productivity growth as a panacea is the assumption that workers have sufficient leverage to capture an appropriate share of those gains. That assumption is on extremely shaky ground, given that even today’s historically tight labour market has been unable to drive nominal wage growth to levels once seen as routine.

Regardless of whether it fits with your personal ideological leanings, workers require a greater degree of bargaining power to demand higher wages. Expressing this sentiment should be relatively uncontroversial, but it will undoubtedly attract critics crowing about the evils of unions and a runaway wage-price spiral. But this is not the 1970s. Back then, over half of all workers were members of a trade union and even with inflation running at nearly 18% in 1975, the average standard of living was still rising, with nominal wages up 27%. Today, unions have never been more irrelevant, and commentators harping on about the inflationary effects of the fastest wage growth in a decade are being disingenuous if they do not also point out that real wages are retreating at a record pace.

There may be much to criticise about the Albanese government’s industrial relations bill, but its thesis, its core reason for being, is sound. Continued stagnation of wages is unsustainable. Inflation may be roaring, but the call for further wage restraint during a period of plunging real wages is just a euphemism employed to foist the costs of adjustment upon those who contributed least toward the problem, and can least afford to bear it. There is another path forward, one we have tread in the past, but workers will need more leverage to demand it—a return to a wage-led model of growth will set Australia on a path to a brighter economic future.

Reclaim Liberalism: The fight against the CPAC populists must be won

An Uncomfortable thought on housing